Why is this question important? The continuing predicament of underperforming schools, especially notable in schools with a history of chronic underachievement and often in high-poverty communities, calls for a fundamental change in how reform efforts are chosen. Reform by its nature is complex; it demands practices that have the greatest likelihood of succeeding. Too often, reforms have failed to achieve important outcomes, such as improved test scores, reduced dropouts, and improved student behavior. Past selection criteria for these efforts have been based on factors such as fads, "common wisdom," or corporate lobbying. These methods have not worked. The need for substantive change that produces results is enormous. Such change requires the adoption of an evidence-based selection process built on scientific research employing practices that have been shown to produce tangible results in real schools. 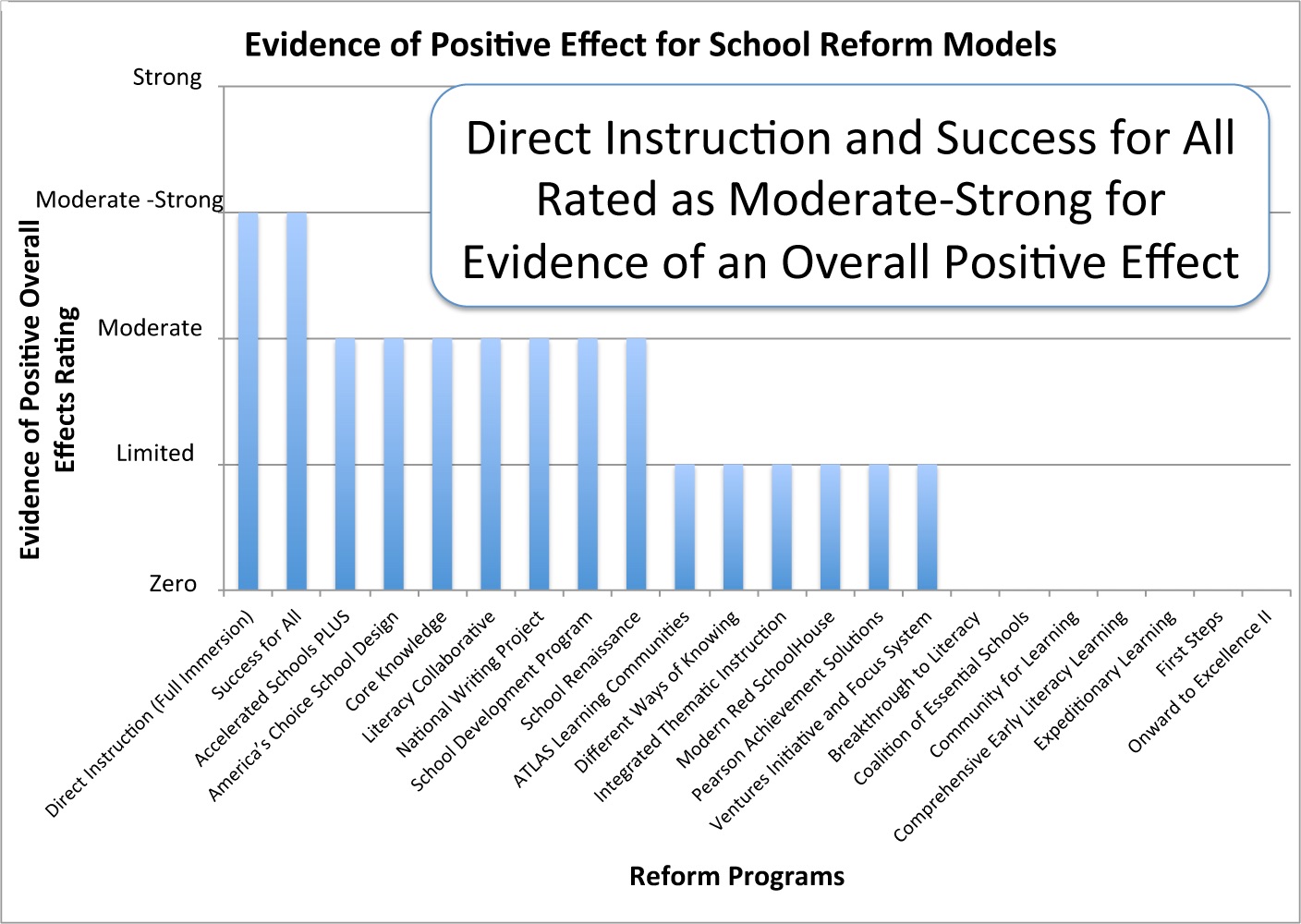 Result(s): The study rated the positive impact of 22 programs on student achievement:

For descriptions and summary of results for each program, see narrative found in the CSRQ study

Implication(s): Despite billions of dollars and countless hours of well-intentioned efforts, educators and policy makers have been not been successful in achieving desired improvements. Past reform efforts have all too often been based on unproven programs and practices that were abandoned after offering educators disappointing results. Fortunately, there is a growing body of research that evidence-based practices when used in combination with practitioners sound professional judgment offer educators, policy makers, and the public support in making more productive choices in programs. The CSRQ report is an example of a well-thought-out analysis that is a practical tool for selecting interventions offering the greatest likelihood of success for reforms efforts that are based on programs used in actual schools.

Author(s): CSRQ, operated by the American Institutes for Research (AIR)

Study Description: The report offers basic information on reform models, including mission and focus, year introduced in schools, grade levels served, number of schools served, and costs. The report examined the following five categories to establish ratings on the effectiveness of the reform models:

The study was designed to measure and report quality and effectiveness for each category combining the following two elements to provide a single rating for each of the categories:

Taken from the CSRQ study, the table shows how five hypothetical models might be rated.

A rating summarizing the data from each model reviewed in the study is provided in the chart entitled Evidence of Positive Effect for School Reform Models. It is the measure of each model's overall impact on student achievement. The rating was derived from a number of studies rated as suggestive and conclusive, the percentage of findings in the suggestive and conclusive studies that demonstrated a positive impact, and the average effect size of those findings. The final rating represents the volume of rigorous research and the strength of the effects reported in that research.