What is the optimum amount of sleep that students ages 10 to 18 should get for best academic achievement results?

Why is this question important? There are no quick fixes for improving the performance of our schools. School reform is a complex issue requiring contributions from many sources. This study offers a concrete way for parents to contribute to this effort. 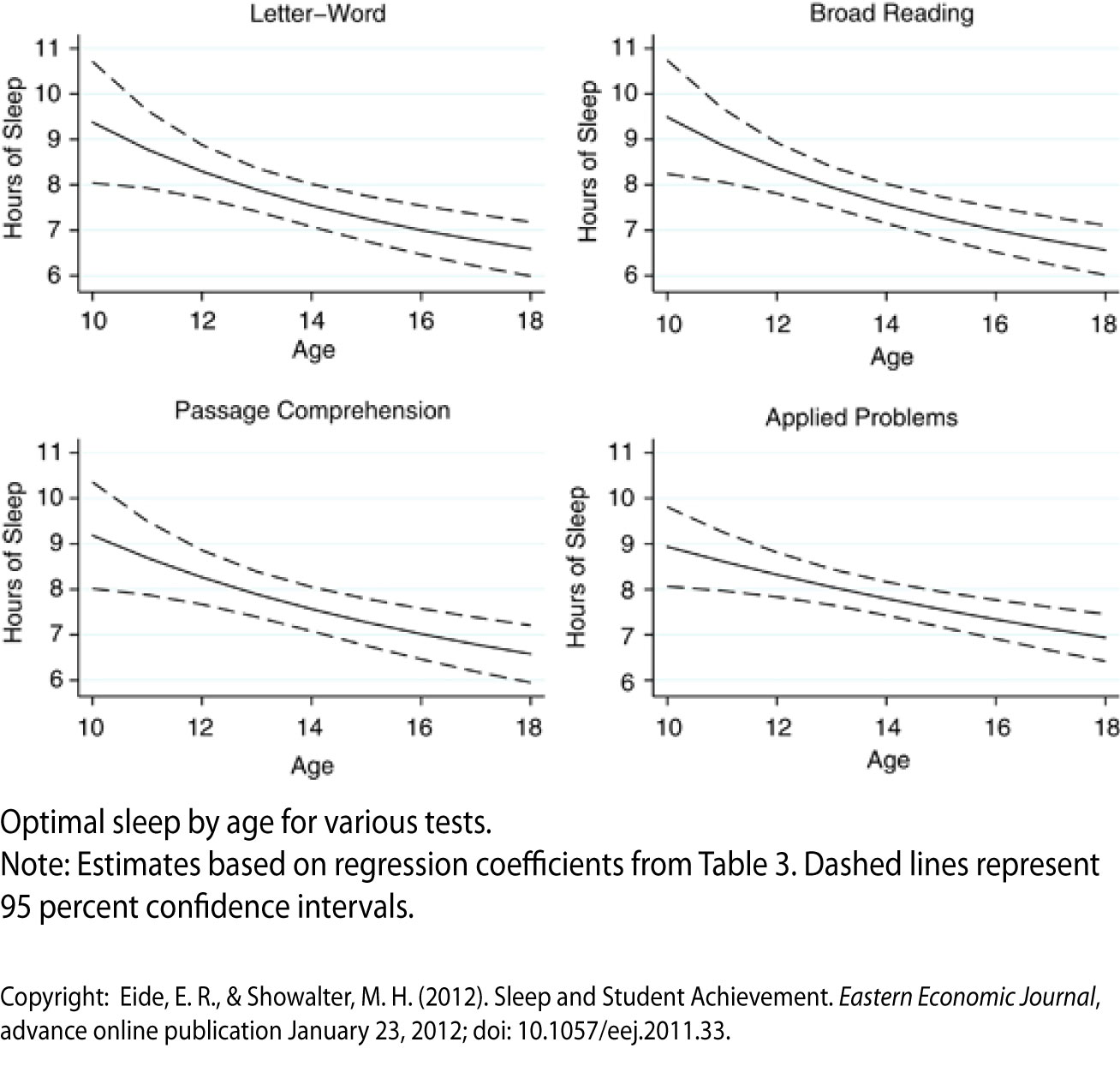 Result(s): The study demonstrated a statistically significant relationship between sleep and test scores for students ages 10 to 18 across the United States. An analysis of the data produced the sleep patterns, shown in the graphs above, which display a crucial link between amount of sleep and test scores. The most beneficial quantity of sleep varied by age, ranging from 9 to 9½ hours for 10-year-olds to 7 hours for 18-year-olds.

Implication(s): This study offers important guidance to parents on making sure their children get the optimum amount of sleep to perform well on tests. The fact that standardized tests play an increasing role in student success in elementary school, high school, and college makes it imperative that parents pay attention to the amount of sleep their children receive.

Study Description: Using a nationally representative sample of the population, this study looked at socio-demographic, psychological, and economic aspects of the effects of sleep on standardized test scores. The data came from the Child Development Supplement (CDS) of the Panel Study of Income Dynamics (PSID), administered by the Survey Research Center at the University of Michigan. The study used the CDS information about 2,907 children and adolescents ages 5 to 19 provided by 2,019 families in 2002 to 2003. The research relied on a regression analysis model to examine differing variables in relation to sleep and student performance.

The student performance outcome data consisted of math and reading scores using the Woodcock-Johnson Psycho-Educational Battery-Revised test (WJ-R). The results were derived from three subtests of the WJ-R: Letter-Word, Passage Comprehension, and Applied Problems (math). A fourth set of data, Broad Reading score, was obtained by combining the Letter-Word and Passage Comprehension tests. The academic tests were all administered by the CDS.

The sleep variable data were obtained through self-reporting from students who were asked the following question: "How many hours of sleep do you usually get a night?"

The control variables were standard and commonly used in economics of education literature. Variables for family income and education level of the head of household were used to control for home financial resources as well as the extent to which education is considered important. Gender, test score, and race/ethnicity variables were also accounted for in controlling for bias. Age was an essential variable in the investigation because of its impact on learning and because of possible variations in the correlation between sleep and test scores at different ages. The study controlled for variations in cost-per-student spending and education models across the country.