Is the job of the school principal becoming too complex?

Why is this question important? The role of the school principal has evolved substantially over the past 50 years. The principal was initially expected simply to manage a school with a focus on providing a safe, clean learning environment for students and teachers. The principal was also tasked with ensuring the school was fully staffed and the employees paid. Academic expectations were minimal and relegated to those few students who were college bound (Catano and Stronge, 2007).

This picture began to change as more students enrolled in college. Between 1950 and 2010, enrollment in colleges grew by 227%. This dramatic acceleration meant that the percentage of college students rose from 1.6% of the population to 6.6% (Digest of Education Statistics, 2010). During this same period, the public grew alarmed that the United States was losing its international competitiveness. Moreover, educators began to acknowledge a disturbing and persistent gap in student performance between the haves and the have-nots in our society. 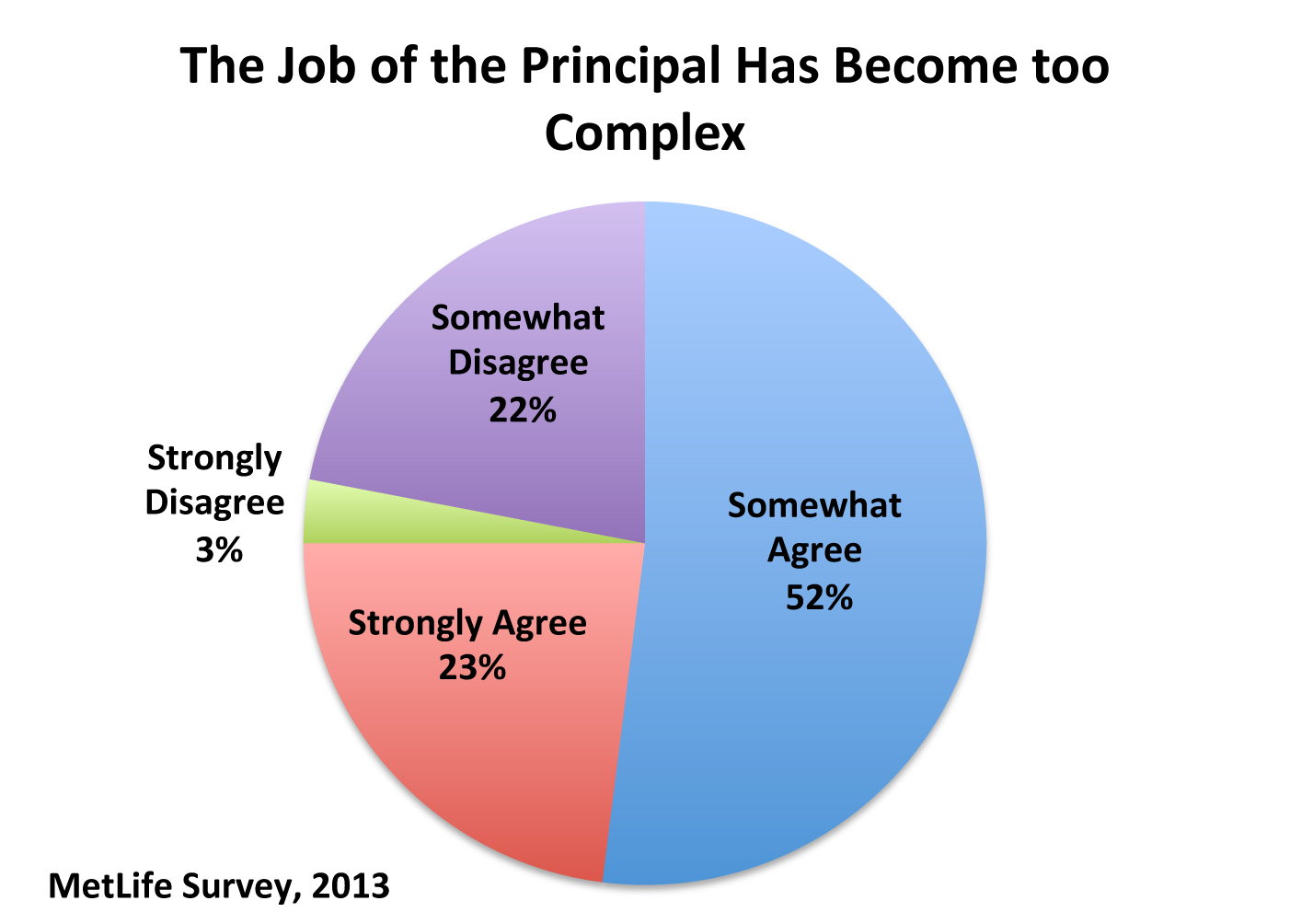 Results: The Markow, Macia, and Lee (2013) study found that the job of school principal is perceived as being more complex and stressful. Three quarters of principals surveyed reported that they either strongly agreed or somewhat agreed with the statement that the job of principal was becoming too complicated. At the same time, teachers are increasingly taking a leadership role in schools and think that principals are doing a good job. Teachers and principals expressed confidence in their ability to implement the Common Core, but both groups expressed concern about the capacity of schools to raise student performance as measured by high-stakes tests. Both principals and teachers agreed that additional support from outside the school was needed.

Implications: The jobs of school principal and teacher continue to expand as new responsibilities are added to the traditional job descriptions. This increased workload is seen as conflicting with the larger goal of improving student performance as schools struggle to improve student outcomes measured by standardized tests and student graduation rates. Pressure to produce demonstrable results at schools in which students of color and/or low-income parents predominate continues to pose a significant hurdle as mandated interventions have failed to produce the promised results.

Unfortunately, simple structural solutions such as class size reduction, higher standards, charter schools, school vouchers, and closing poorly performing schools haven't worked. Principals and teachers are urgently seeking solutions that will relieve the pressure brought on by greater accountability, but in the meantime they are leaving the field (New Teacher Center, 2010). On the positive side, data strongly support solutions that focus on improving classroom instruction. These practices have the potential to be a game changer for both principals and teachers (Robinson, Lloyd, & Rowe, 2008; Robinson, 2007). The data also suggest that leadership is a critical piece in solving the dilemma in which schools find themselves (Robinson, Lloyd, & Rowe, 2008). Research additionally suggests that the answer lies outside a heroic leadership model. Principals might benefit from a redesign of the job, which appears to have become too much for one person.

Study Description: The 2013 Markow, Macia, and Lee study is an analysis of teacher and principal views on the responsibilities and challenges facing school leaders, including the changing roles of principal and teachers, budget and resources, professional satisfaction, and implementation of the Common Core. The study combined quantitative and qualitative methods to determine the attitudes and perceptions of teachers and principals.

Catano, N., & Stronge, J. H. (2007). What do we expect of school principals? Congruence between principal evaluation and performance standards. International Journal of Leadership in Education, 10(4), 379–399.

* Study from which graphed data were derived.