How does coaching compare with traditional staff development in improving student achievement?

Why is this question important? Teachers have been identified as wielding the greatest influence on student outcomes (Marzano, Waters, & McNulty, 2005). A key strategy employed to improve teacher performance is post-employment professional development. Despite the significant resources invested in traditional staff development, What Works Clearinghouse (WWC) and Johns Hopkins University's Best Evidence Encyclopedia have found that staff training produces few objective outcomes in student performance. It is critical that we develop a solid knowledge base of practices that work as tools in school reform and efforts that should be avoided. A study conducted by Allen, Pianta, Gregory, Mikami, and Lun (2011) examined the impact of one program, MyTeachingPartner (MTP), that is reliant on coaching to improve student achievement. 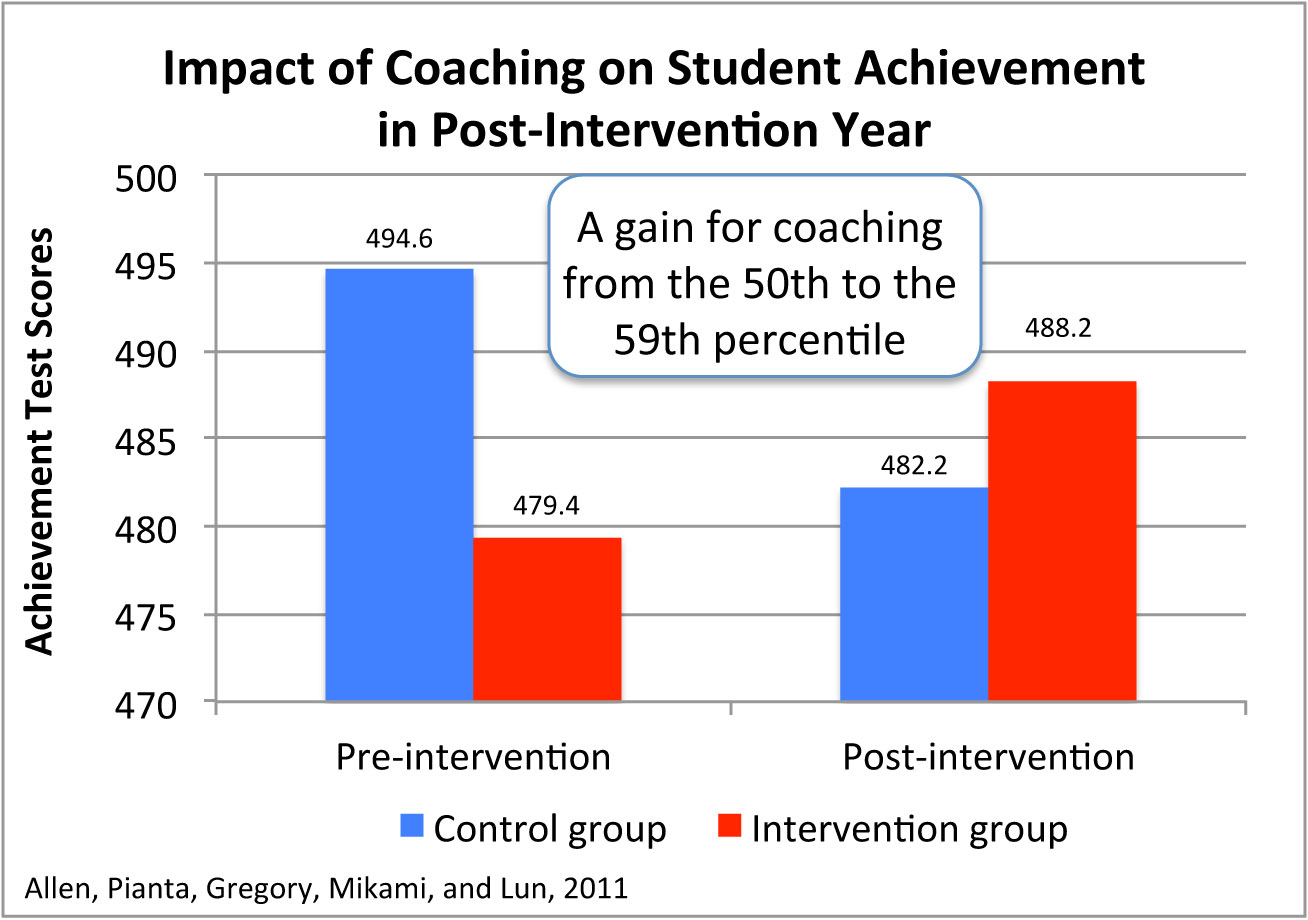 Result(s): The study found no statistically significant difference after the first year in the performance of students whose teachers received coaching versus the performance of students whose teachers were in the control group. The second-year results suggest that coaching offers a method for improving teacher performance, leading to an improvement in student achievement scores. The MTP intervention group reported net gain, representing an increase in student achievement from the 50th to the 59th percentile. It outperformed the control group, with a reported effect size of 0.22. It should be noted that an effect size of 0.22 is considered small.

Implication(s): The study offers further evidence that staff development should include coaching as an effective tool for improving teacher and student performance. The study presents evidence for video recording teaching sessions as a cost-effective method for coaches to observe teacher behavior. Additional studies need to be conducted to understand why student performance didn't change significantly after the first year and to verify the second-year effects.

Study Description: The research consisted of a randomized controlled study designed to look at the effects of teacher training that relied on coaching to improve student performance in secondary schools. WWC noted the randomized design as a strength of the study. A total of 88 teachers were randomly assigned to either the MTP intervention group or a control group; 76 teachers participated during the intervention year, and 61 remained in the study during the post-intervention year.

The intervention year entailed workshop training followed by coaching based on recorded teaching sessions. Twice a month teachers provided MTP coaches with video recordings of lessons they had taught. The teachers looked at their own behavior as well as student reactions. The coaches offered feedback, recommendations for improvement, and specialized training as necessary in emotional support, classroom organization, and instruction support.

The study measured student achievement using the Commonwealth of Virginia Standards of Learning (SOL) tests. It assessed the effectiveness of the coaching by comparing the achievement of students of MTP-trained teachers with that of students of teachers who received traditional in-service training. Data collected by the study were analyzed using value-added modeling.

WWC found possible issue with the study on two grounds: the post-intervention year had higher attrition among MTP teachers than among control teachers, and there were possible differences in the composition of the second-year student groups. The studies authors offered evidence to counter these concerns, but it did not completely satisfy WWC.

Definition(s): Coaching: A method of instruction for continued improvement of performance. The coach instructs the trainee in standards, demonstrates skills, and observes the skills in use in the actual setting in which they are to be employed. The coach provides feedback and instruction to the trainee on how to improve performance based on observation of the trainee's performance.

MyTeachingPartner (MTP): A system of professional training supports developed through the Center for Advanced Study of Teaching and Learning at the University of Virginia Curry School of Education. MTP provides teachers with levels of support: video training materials; applying skills in the classroom; improving teachers' ability to instruct and effectively interact with students; and interactive coaching and feedback to individual teachers based on video-recorded sessions of the teacher in the classroom.

Value-added modeling: Statistical analyses providing quantitative performance measures that can be used to develop, monitor, and evaluate schools and other aspects of the education system. When used to analyze education systems, value-added models comprise a collection of complex statistical techniques using multiple years of test score data to estimate the effects of individual schools or teachers on student performance.