Why is this question important? Student suspensions are an intervention frequently used in schools to control student behavior. During the 2011–2012 school year in the United States, 3.5 million students were disciplined by in-school suspension and 3.45 million by out-of-school suspension (U.S. Department of Education Office for Civil Rights, 2014). These statistics are especially troubling because African American and economically disadvantaged students are overrepresented in school suspension data (Christle, Nelson, & Jolivette, 2004; Shirley & Cornell, 2011; Skiba et al., 2011; Sullivan, Klingbeil, & Van Norman, 2013). The most common rationale for suspending students is to deter students from future infractions of school conduct rules. Unfortunately, many students find school far more aversive than the punishment. With our knowledge of human behavior, this suggests that suspensions may in other ways negatively impact the very students who are at the greatest risk for failure in our schools, increasing the frequency of suspension and the number of students who drop out of the system. This data mining piece seeks to answer the following question: Does suspension produce significant unintended consequences that harm the students it was intended to help? 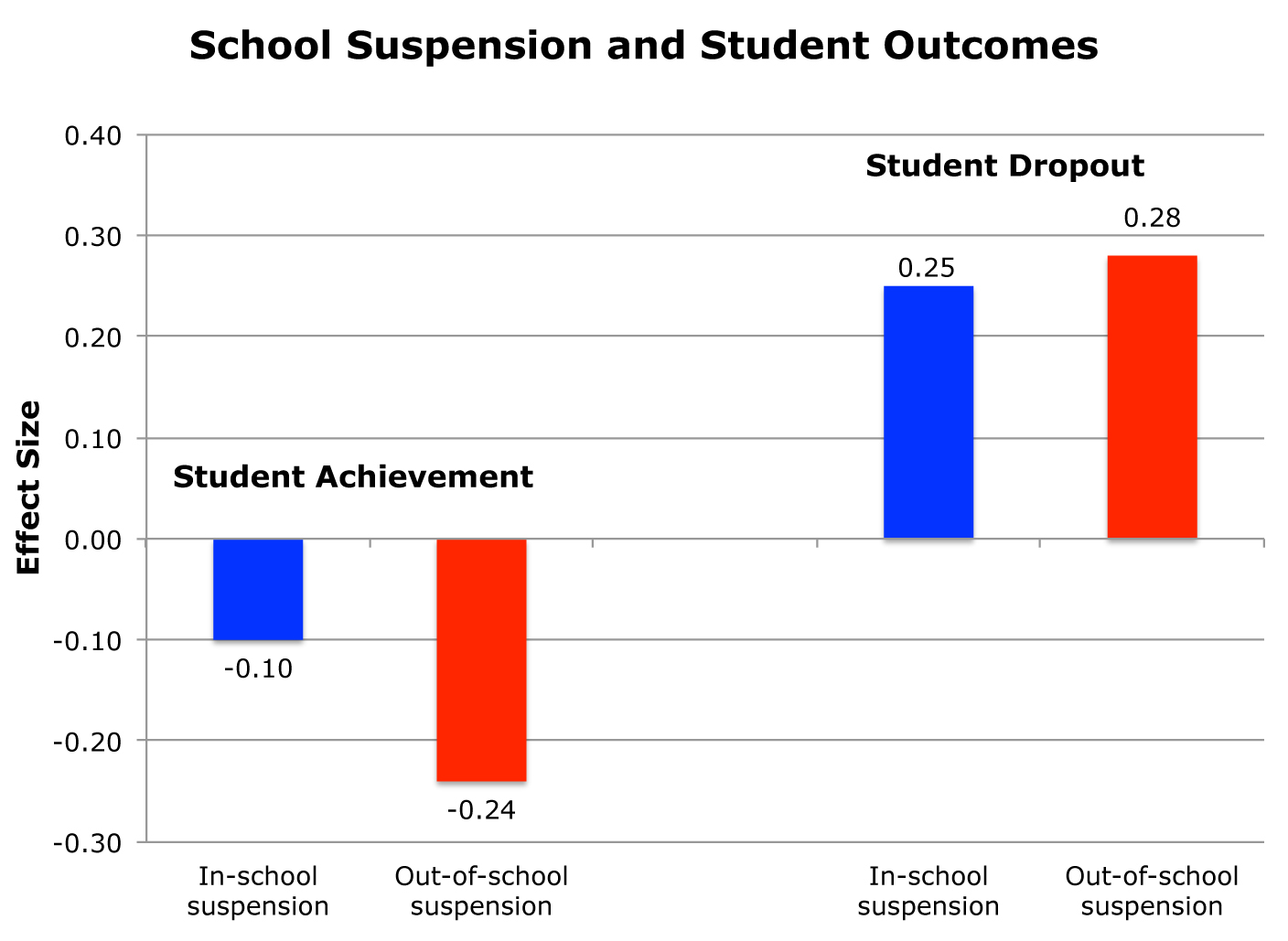 Result(s): A meta-analysis conducted by Noltemeyer, Ward, and Mcloughlin (2015) shows a negative relationship between suspensions and student performance on achievement tests. A slight negative effect size (ES) of -0.10 was associated with student achievement for those punished with in-school suspensions, and a more meaningful -0.24 ES for students receiving out-of school suspensions. These are small but possibly consequential effect sizes for both forms of suspension on student academic performance.

This study, importantly, adds to our knowledge base by quantifying the overall strength of the relationship between the two commonly used forms of suspension and key educational outcomes across a diversity of school settings and student populations.

Implication(s): Although the Noltemeyer et al. meta-analysis cannot be considered the definitive answer on the effects of suspension as an educational tool, the techniques reviewed in the paper offer evidence for reconsidering suspension as a means for solving student conduct problems. Further research into these issues needs to be conducted, but in the meantime administrators should consider redesigning their schools' policies and practices in accordance with the evidence found in this meta-analysis. Educators currently have viable evidence-based conduct training and disciplinary options that are not associated with negative impacts on achievement and dropout rates. An example of a well-researched alternative is Positive Behavior Intervention Supports (PBIS), a school-wide framework designed to enhance academic and social behavior outcomes for all students by emphasizing the use of data for informing decisions about the selection, sustainable implementation, and progress monitoring of evidence-based behavioral practices (Curtis, Van Horne, Robertson, & Karvonen, 2010).

Study Description: The Noltemeyer et al. meta-analysis examined research from 53 cases taken from 34 studies. These studies met all of the following criteria for inclusion:

Of the 53 cases, 42 met the criterias for looking at the relationship between suspension and achievement, and the remaining 11 were acceptable for investigating the relationship between suspension and school completion. The cases included more than 7,000 participants from over 100 schools. The mean student age was 13 years, and the mean student grade was eighth grade.

Definition(s):
In-school suspension: Instances in which a child is temporarily removed from his or her regular classroom(s) for at least half a day but remains under the direct supervision of school personnel.

* Study from which this data mining piece and graph data were derived.